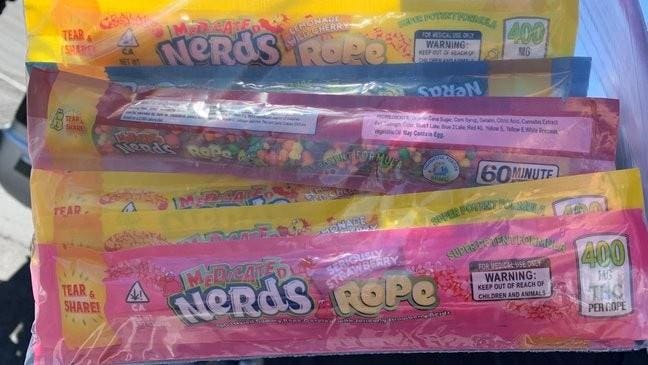 Last week, representatives of some of the biggest food brands in America—and the holders of internationally famous trademarks, like the cartoon characters coaxing young kids to eat cereal so sugary it could fail an Olympic doping test—called on Congress to follow a noble quest.

Federal lawmakers must crack down on graphic designers and their accomplices: specifically, anyone selling packaging riffing off of theirs to underground-market cannabis merchants, whose cheeky packaging is tricking more and more kids into eating weed-laced food.

This is not the first time cannabis’s provocative marketing has angered big valuable brands. The Girl Scouts of America—whose signature product were hijacked by a now-famous family of cannabis strains, the reason why Cookies is probably the best-known brand in the industry today—have pursued legal action against merchants using their property to sell pot.

But this is a new development in that it’s not so much a drug war law-enforcement move, but a cannabis crackdown called for by brands, for brands.

As per an April 27 letter to federal lawmakers from a coterie of major consumer-packaged food makers—representing major cereal, snack, and drink-makers including Pepsi, General Mills, and Kellogg’s—though it’s already a trademark violation, lawmakers should amend federal law to specifically outlaw online commerce platforms from selling packaging that too closely mimics their protected trademarks.

It bears mentioning that these offending products aren’t alleged to have been sold legally. States that have regulated cannabis markets already strictly regulate both packaging as well as the finished product to protect kids. Certain shapes of gummies, for example, are banned as being too child friendly. Other states mandate cannabis goods be wrapped only in plain, bland colors; some states outlaw edibles altogether because of the child panic.

But though the “problem” identified is already illegal, according to these major food groups, amending the SHOP Safe Act to prohibit packaging with counterfeit “famous marks,” like the underground remix culture wink-and-nod that weed heads have always seemed to enjoy, would fix what they call “a critical health and safety issue.”

How critical? Though it’s true that across the country, poison control centers and local authorities are reporting huge increases in emergency calls related to children and cannabis (and also pets, but for now at least, children have louder advocates), per capita, incidences of accidental THC poisoning are still extremely low: a few thousand calls per year nationwide, at a time when intoxicating cannabis-infused foodstuffs, including hemp-derived Delta-8 THC products “legalized” by the 2018 Farm Bill, are available in 50 states.

Mostly, these are reports of children over-ingesting on edibles somehow. Sometimes, the story goes, it’s because the kid mistook dad’s weed gummies or mom’s pot chocolate for a legitimate treat, including a treat with brand identity, like the weed-infused “Nerds rope” that ended up in dozens’ of needy families’ food bank boxes early in the COVID-19 pandemic, according to reports.

In April 2020, scandal struck a food bank in Roy, Utah, after 72 families somehow received marijuana-infused candy in their charity boxes. Five children ate what they thought was legitimate candy, and not the ultra-powered, 400-milligram-per-package illicit market product—four times the 100 mg/THC limit seen in most legal states, which Utah is not—that sent two to the hospital.

All the kids recovered, leaving an embarrassed food bank to beg forgiveness. It looked real to them and whomever donated it to the food bank—one hopes, unless this was someone’s uncouth and dangerous idea of a prank—because of the packaging: a brightly-colored, perfectly convincing and understandably alluring send-up of real Nestle-branded Nerds rope, as the Washington Post reported.

But if brands or the feds want to discourage what’s always been a strong current of underground cannabis culture, a better option would be to embrace full-on federal legalization, which would encourage consumers to buy more readily regulated, bland-by-law goods, said Justin Strekal, a federal cannabis lobbyist active on Capitol Hill.

“I get why they [the big brands] are angry,” said Strekal, who noted that these CPG brands have, to date, not been involved in any drug-policy reform issues. “This is why they should support legalization and regulation to let a legal market that wouldn’t rip off their brands establish and thrive.”